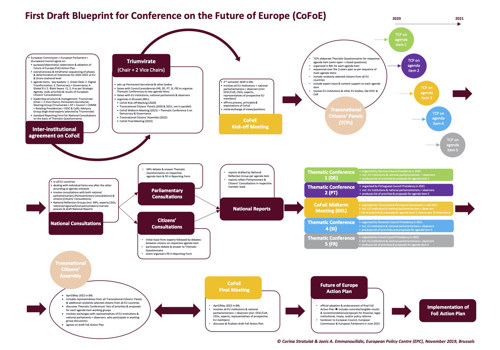 Things are moving in Europe. In July, the new President of the European Commission, Ursula von der Leyen, proposed the organisation of a two-year Conference on the Future of Europe (CoFoE), beginning in 2020 and ending in 2022. Given that President von der Leyen envisioned that European citizens would "play a leading and active" role in this endeavour, her call was especially welcomed by the civil society sector. A recent Franco-German non-paper has endorsed President von der Leyen's idea as "prompt and necessary". And the European Parliament is also positioning itself on the issue.

There is no time to waste. We should not wait for another major crisis to remind us that the European Union's (EU) to-do list is still long and urgent. Despite the strenuous efforts of the outgoing EU leadership to limit the damage inflicted by the poly-crisis over the last decade, internal and external centrifugal forces continue to put a strain on European integration. While we might be more aware today of Europe's multifaceted political, socio-economic, and cultural challenges, and while we might agree more on the Union's strategic priorities, we are yet to demonstrate the political will and courage to radically rethink how the EU can remain relevant in the global context and in the eyes of its citizens. The Conference could help us to move beyond the current state of affairs – provided that it is done well.

At this stage, there are more questions than answers regarding the overall purpose, process, substance, and actors involved in the CoFoE. There are diverging views on what the Conference should be about and how it should be organised. But a proper debate still has to get underway and become more concrete. The attached first Draft Blueprint for the Conference on the Future of Europe seeks to give this process a nudge in the right direction by sketching how things could unfold in practice.

While reflecting the guiding principles outlined by President von der Leyen and the Franco-German non-paper, the Draft Blueprint lays out a detailed model on how to implement the Conference over the next couple of years. It outlines the main elements of an inter-institutional agreement and the different phases and milestones, involving a plethora of actors at both the national and transnational level, and marrying parliamentary and citizens' elements throughout the process.

It foresees the elaboration of National Reports reflecting the outcomes of both Parliamentary and Citizens' Consultations in all member states. It includes a role for the upcoming rotating Council presidencies responsible for the organisation of four Thematic Conferences on the main agenda items dealt within the framework of the CoFoE. It proposes three main meetings of the Conference on the Future of Europe in Brussels, with the final one in 2022 aiming to result in the adoption of a Future of Europe Action Plan with concrete recommendations for financial, legal, institutional, treaty and/or policy reforms.

The Draft Blueprint seeks to offer a stimulus hoping to prompt feedback and inspire improvements to help us advance towards a fully-fledged CoFoE design in the weeks and months to come. The next European Council meeting on 12-13 December could be a first moment for EU leaders to discuss and express support for the Conference.

This Draft Blueprint provides a platform for contact and exchange between European citizens and their political representatives, co-creating new concepts for the future of Europe at all levels of EU policymaking. Our strategy is complex, resource-intensive, and bound to a tight timeline. Nevertheless, we believe that, without carefully sequenced interaction and scrutiny between many actors, across many levels and on different key topics, and without weaving participatory instruments into the process, in the spirit of transparency, innovation, and inclusiveness, the implementation of the CoFoE will be found lacking. The first Draft Blueprint is our contribution to the important conversation about the Conference on the Future of Europe and it is work in progress. The time for making excuses is over – let's discuss, decide, and move things forward!

NOTE: For optimal readability, the PDF is best printed in A3 format