Second Draft Blueprint for Conference on the Future of Europe 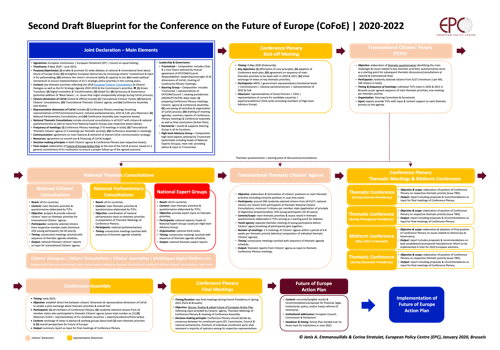 This is our second draft blueprint for the Conference on the Future of Europe.

It is a substantially reworked version of a first draft, which we published in November 2019. The second draft blueprint reflects the progression of our thinking at the EPC, while also taking into account the recent positions of the European Parliament and Commission, as well as the ongoing debates in the Council.

Our second draft blueprint goes beyond what's currently on the table. It advocates both a strong citizens' and representative dimension and aims to closely link the two at the national and transnational level. More concretely, the blueprint includes: (I) Transnational Citizens' Panels, which will prepare thematic questionnaires that will function as a starting point for the thematic discussions/consultations at both the national and transnational level; (II) National Thematic Consultations, which aim to encourage debate in the member states and prepare citizens as well as national parliamentarians for their participation in the transnational discussions/consultations (Citizens' agoras and Conference Plenary meetings); and (III) a Conference Assembly that establishes a direct link between the citizens' and parliamentary dimensions by bringing together randomly selected citizens from all member states and the members of the Conference Plenary, which includes representatives of the three main EU institutions and national parliamentarians.

At the end of the process in 2022, we foresee the adoption of a Future of Europe Action Plan with tangible results and recommendations to ensure that the Conference is more than a talking shop and leads to concrete financial, legal, institutional, and policy reforms, and even treaty change, if necessary.

Finally, rather than debating an endless list of issues, the Conference should, according to our blueprint, concentrate on a limited number of strategic priorities, which reflect the outcome of the 2018 European Citizens' Consultations and Citizens' Dialogues, as well as the EU Strategic Agenda 2019-2024 defined by the European Council and the main priorities of the von der Leyen Commission. Those are the Green transition, Digital innovation and transformation, a Global EU, and Democracy and Governance.

Below you will find two versions of our second draft blueprint: one is a simplified timeline outlining the sequence of the different meetings over the next two years (A4 format), the other a more intricate and complete overview detailing the goals, scope and outcome of each step (A3 format).

NOTE: For optimal readability, the PDF is best printed in A3 format