Conference on the Future of Europe – Mind the Gaps! 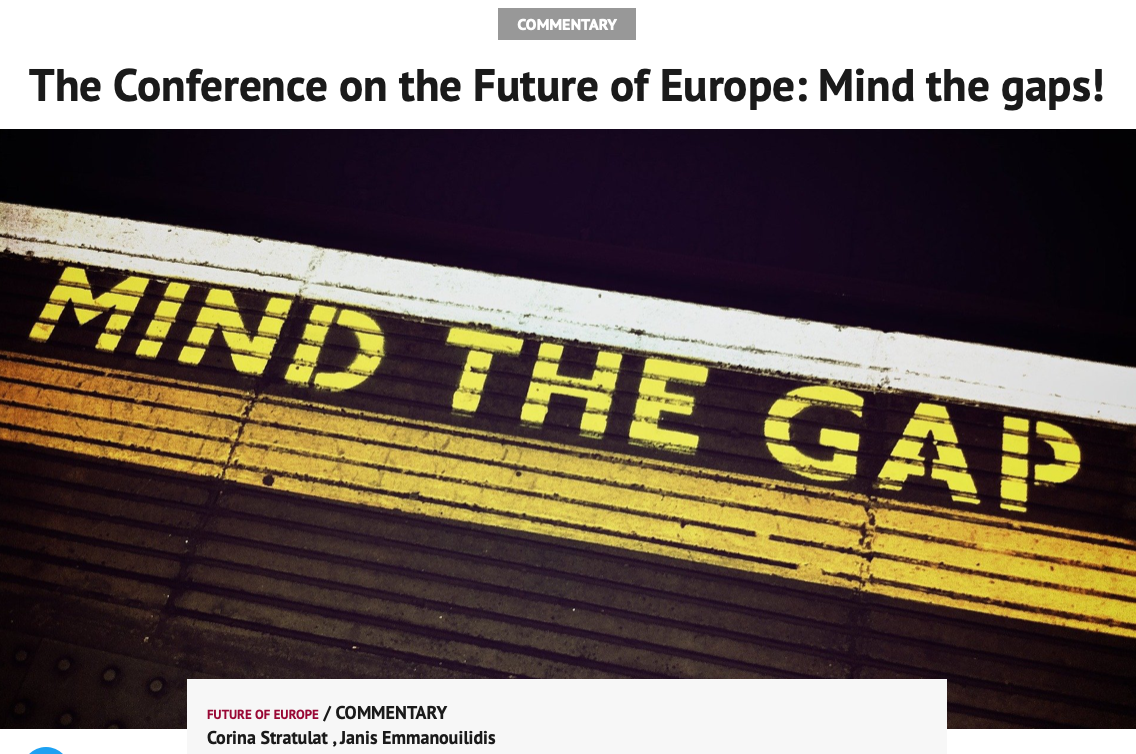 The Conference is an experiment of inclusive reflection and renewal that could help our European democracies innovate, adapt and prosper. But to be successful, the Conference leadership must be mindful of 6 treacherous gaps in the Joint Declaration.

After a year-long delay, the Presidents of the European Commission, European Parliament and Council have finally signed the Joint Declaration on the Conference on the Future of Europe (CoFoE). The signatories agree to "open a new space for debate with citizens to address Europe's challenges and priorities" so that people from "all walks of life and corners of the Union", especially younger generations, can "have their say on the future of Europe". They also commit to following up on the input collected from citizens' events until spring 2022, when the Conference shall reach its conclusions.

Such a "citizens-focused, bottom-up exercise" is an opportunity to have critical and potentially even uncomfortable conversations about the modern drivers of transformation (e.g. inequality, climate change, digitalisation, ageing societies, global power shifts) in a post-COVID-19 world. The magnitude of powerful forces constantly gathering steam entails that decision-makers need people's opinions and buy-in to determine the future direction of Europe. Politicians need their citizens' support to shoulder the responsibility of the weighty decisions required to successfully adapt to the complexities and difficulties of this day and age.

The Conference is an opportunity to foster this urgent process of inclusive reflection and renewal, and it is high time to get the ball rolling. But to be successful, the Conference leadership should address head-on several glaring gaps in the Joint Declaration.

Putting the Conference – a complex and lengthy process of events and deliberations concerning key European issues, in innovative formats and between various actors at different levels of governance – into practice was always going to be a learning curve. All the more so given that the Joint Declaration is as clear as mud on the exact why, what and how of this exercise. These imprecisions were a deliberate choice to enable compromise and get the EU institutions and member states on board.

Nevertheless, the Conference should not be a stab in the dark in every direction. More specifically, to set it on the track to success, its leadership must first overcome 6 particularly dangerous gaps:

The Joint Declaration specifies that the Executive Board – the Conference's main body co-chaired by the Parliament, Commission, and Council – will decide "the modalities for reporting on the outcome of the various activities" undertaken in the context of the CoFoE "by consensus". But when it comes to key decisions about the process and final outcome of the Conference, strict compliance with the consensus principle could result in either a stalemate or the very lowest common denominator. Neither of these scenarios will likely help the Conference be remembered as a worthwhile endeavour.

The Executive Board should therefore agree from the outset on more effective rules for its internal decision-making process. This will be a sine qua non when the Conference leadership has to make difficult decisions related to the final outcome of the process.

The list of issues to be covered by the Conference is extensive. The Joint Declaration mentions more than a dozen topics, and "[c]itizens remain free to raise additional issues that matter to them". But experience suggests that exercises in citizen participation are most successful when they focus on particular issues and aim to answer specific questions. Less is more in the field of participatory democracy – if the intention is to generate clear conclusions and tangible recommendations.

The CoFoE should therefore limit the number of strategic priorities that will be addressed until next spring and distil each of them into a number of key questions that will guide the deliberations. The multitude of relevant issues should be clustered into five main areas: (i) a green Europe; (ii) a digital Europe; (iii) a global Europe; (iv) the European Health Union; and (v) the future of European democracy. A European Citizens' Panel held at the start of the CoFoE should elaborate the thematic questionnaires for each of these strategic priorities. This would help guide the discussions at all the major events conducted in the Conference framework.

The Joint Declaration leaves the organisation of national, regional or local events to the willingness of different national-level actors to hold national citizens' panels or thematic events in line with their "own national [...] specificities". But the 2018-19 European Citizens' Consultations already exposed the limits and pitfalls of uncoordinated and unsystematic efforts across the member states. Giving EU countries free rein to implement consultations led to 27 different national campaigns, each with its own branding, format, timeframe and cacophony of opinions.

The Executive Board should propose a more standardised method for implementing national events (e.g. same agenda, format, reporting form). This would make the process coherent, help citizens understand that they are part of a single, Europe-wide discussion and produce more persuasive results. It should also appoint a team of experts to continuously monitor and peer review the quality of national events. This would allow for the exchange of best practices and the improvement of national methods over time.

4. The link between the citizens' and representatives' dimensions

The Joint Declaration is rather vague about how citizens' input will be reflected in the discussions with and among policymakers. It merely states that a "Conference Plenary", composed of representatives from EU institutions, national parliaments and citizens, will ensure that the recommendations from national and European citizens' panels will be "debated without a predetermined outcome".

For a Conference with and for European citizens, this missing link between citizens and their representatives is highly problematic. The Executive Board should therefore specify the overall objectives, exact composition, working methods, timetable, and sequencing of the meetings of the Conference Plenary in 2021 and 2022. This would align the connection between citizens and their political leaders with the Conference's own principles of openness and transparency.

The Joint Declaration indicates that by spring 2022, the Conference should present its final outcome in "a report to the Joint Presidency". But simply producing yet another report for the Presidents of the Council, Parliament and Commission will not suffice. The results of the CoFoE should be more binding and concrete. As such, the Executive Board should commit to producing a detailed 'Action Plan on the Future of Europe', complete with tangible recommendations for legal, financial, institutional, policy and/or even treaty reform, if necessary. To close the feedback loop properly and avoid popular frustration, this Action Plan should also indicate how and to what extent citizens' views and proposals have been taken on board.

6. Our strategic allies in the Balkans

The Joint Declaration leaves prospective member states out of the CoFoE. By not counting the Balkan countries among those stakeholders who should participate in a conference about the future of Europe, the EU sends the wrong political signal to a region it has promised a European perspective. This misguided decision reinforces doubts in the Balkans that the EU is not serious about its closest neighbours.

Even if only unofficially, stakeholders at different EU levels should find ways to include Balkan political leaders and representatives of citizens as observers in the Conference proceedings. The Regional Cooperation Council should help organise and coordinate a network of Balkan politicians who are tasked by their governments to follow and produce input for the CoFoE. EU donors should support civil society networks in the region to organise citizens' events in the Balkans, alongside those held in the member states.

The Conference on the Future of Europe is about to start. It is a welcome and necessary effort to have constructive debates about some of the most pressing issues of our times. It is also an experiment that will test the Union's ability to expand the scope of citizens' involvement in politics and deliver concrete and meaningful results that will be implemented in the years to come.

Perhaps it will result in wholesale reform or only minor tweaks to the current sweeping meanders. Either way, this experiment could help our European democracies to innovate, adapt and prosper. But its success is by no means a given, and time is too short to cover all bases. To give it their best shot at realising the potential of this initiative, the leaders of the Conference should mind these 6 treacherous gaps.