Towards a New Pact for Europe 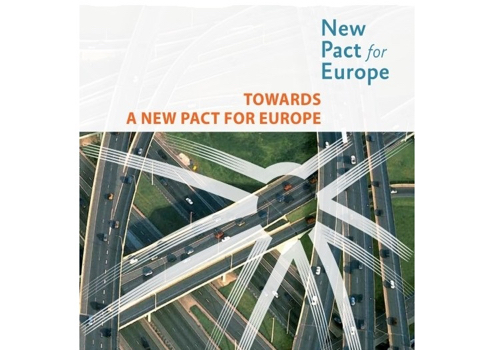 The second report of the New Pact for Europe project, which reflects the work and discussions of a Reflection Group, enriched by input from an Advisory Group made up of prominent Europeans from the worlds of politics, business, academia, and civil society, is designed to feed into the on-going discussions about the Union’s future as the new EU leadership team takes charge. It aspires to contribute to the debate on how to introduce ambitious but workable and realistic reforms to make the EU more effective in responding to the challenges Europeans are facing.

The report identifies two interlinked strategic challenges faced by the EU: those posed by economic, social and political divisions within and between countries, leading to increased fragmentation; and the growing perception in many EU countries that European integration is no longer a ‘win-win’ for everyone. It argues that simply consolidating past achievements will not be enough and that closer cooperation will be indispensable if Europe wants not only to overcome the immediate crisis, but also to create fresh momentum that will allow it to exploit more of its potential and meet citizens’ needs and expectations.

The report proposes a New Pact between Member States and between the EU and its citizens: a Pact based on three main pillars – an Enabling Union, a Supportive Union and a Participatory Union – and a new grand project as part of a package deal balancing the interests of different Member States and different groups within them.

An Enabling Union should foster sustainable economic growth and job creation by stimulating (public and private) investment at both European and national level, promoting social investment and enhancing Europe’s overall competitiveness by supporting structural reforms, especially in countries that are lagging behind, while remaining on the path towards fiscal consolidation. Measures to strengthen and transform national economies will enable Europe to realise its combined growth potential, which is in the interest of all EU countries irrespective of how well or badly they have weathered the crisis storm.

A Supportive Union should enhance the EU’s ‘caring dimension’ to address concerns that the crisis has hit some countries and social groups exceptionally hard, fuelling a sense of social injustice within and between Member States. The potential measures foreseen under this pillar would send a clear signal to European citizens that efforts to reform national economies and social systems will always have to respect minimum social standards and will not lead to a ‘race to the bottom’. Instead, a social compact including social convergence criteria and more specific measures to support those suffering most from the crisis would flank efforts to promote Europe’s economic competitiveness.

A Participatory Union should strengthen the ties between the EU and its citizens by increasing its democratic legitimacy. The focus should not only be on traditional issues such as the powers and role of the European Commission and Parliament, but also on expanding the opportunities for frank discussion within Member States and between citizens from different EU countries; on mechanisms to strengthen the public’s direct involvement in the EU policy debates; on ways to enhance the role of national parliaments; and on expanding schemes that enable people to experience the direct benefits of EU membership.

In addition to these three main pillars, the EU should heed the lessons of history and seek to identify and implement a new ‘grand project’. In the current political and economic climate, an Energy Union appears to offer the greatest potential to demonstrate the EU’s added value and deliver genuine benefits for many different groups of Member States and stakeholders.

This report will be discussed in a majority of Member States with policy-makers, EU experts, stakeholders and citizens, and the outcome of this process will impact the future progress of the New Pact for Europe initiative.

For more information about the project see here: www.newpactforeurope.eu