Social Cohesion in Europe After the Crisis 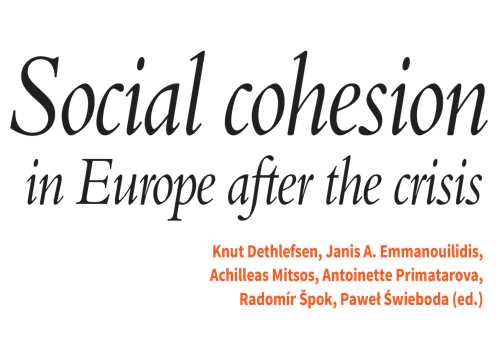 In the last few years, Europe has been forced to re-think its socio-economic model. Social indicators speak for themselves. Real household income declined significantly between 2008 and 2012, employment rates are lower and the number of people in poverty saw a steady rise with a growing divergence between EU countries.

In the eurozone, cuts in public spending and internal devaluation have been the main tools to aim at a correction of unsustainable fiscal positions and a strengthening of competitiveness. It has carried a heavy social price tag. Outside of the eurozone, austerity has also been the prevailing policy, seen as inevitable to avoid economic instability. The crisis has not hit everyone equally. The general losses have been high, but there have also been some quite important redistributive effects. With all the difficulties of defining and measuring 'fairness', it is clear that the adjustment has not been equitable. Apart from issues of market failure, there have been direct increases of inequality within each of the member states. Higher poverty rates have been observed, rises in inequalities between higher and lower income earners as well as intergenerational inequalities between age groups. Long-term consequences are only beginning to surface in the public debate as the most immediate pressures of the crisis are slowly overcome.

In this report, the authors first of all look at the results of the survey we have carried out in seven European countries and review perceptions of the socio-economic model. Subsequently, they assess the importance of the social dimension in the broader context of the European growth model. The authors discuss the impact of the structural challenges of globalisation, demography and technological change. They then review the EUs performance in the crisis. Finally, the authors make a number of recommendations on how to bridge the gap between Europeans expectations and reality.

This report concludes the project on "New Sources of Cohesion" which has been the result of cooperation between Centre for Liberal Strategies, demosEUROPA - Centre for European Strategy, ELIAMEP, European Policy Centre (EPC), Europeum and Friedrich-Ebert-Stiftung.