Preparing the ground for countering fragmentation 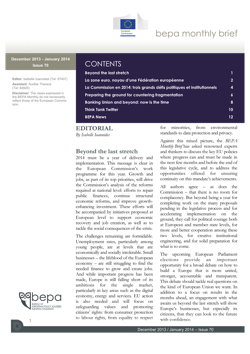 2014 is a year of transition with an uncertain outcome regarding the future steps of European integration. Following years of deep crisis, the new EU leadership and national capitals will together have to decide which way they want to go in the years to come. The outcome of this venture is unclear. But one thing seems certain: if Europeans want to sustainably overcome the current malaise and prepare themselves for the challenges ahead, they will soon need to take decisive decisions about the EUs long-term future.

This will be no easy task, considering the state of the Union, the current mood throughout the EU, and the risks related to an increasing fragmentation between and within EU countries. As part of their legacy, the current leadership should use their remaining time in office to help prepare the ground for their successors, who are likely to face the daunting challenge of keeping Europes reform engine running. But what should they do in view of the current state of affairs, the prevailing sentiment in national capitals and the profound risks ahead?

State of the Union

The Union and its member states have gone through and are still facing the aftershocks and collateral damage caused by one of the worst crisis in EU history. The experience since 2010 has revealed and exacerbated significant deficiencies in the Unions economic and political construction. It cast doubt on the fundamentals of the European project as the unthinkable became thinkable, i.e. that the crisis snowball might spiral out of control and trigger an avalanche with the potential to bury the euro and the European project underneath it.

The situation remains volatile. It is far too early to judge the deep consequences of the crisis. However, in systemic terms the situation has improved significantly compared to the summer of 2012. The fears of the worst-case scenario havereceded. Both the ECBs promise to do whatever it takes to guarantee the stability of the euro and the substantially reduced risk of a country leaving the common currency, have boosted confidence and averted the danger of a euro meltdown.

However, the EU is not out of the woods. The day-to-day reality for many ordinary people remains extremely difficult and the crisis is not overcome, given the fragility of the situation. The banking system is still highly fragmented; the levels of government and private debt remain alarming; (youth) unemployment is exceptionally high and economic recovery fragile; the social and political situation in many countries remains volatile; and the crisis of political elites and the rise of populist rhetoric on all sides of the political spectrum  including mainstream parties   raises concerns about the state of European democracy.

Collective efforts to overcome the EMUs remaining structural shortfalls have lost momentum since late 2012. Reactive muddling through has become the predominant mood of the day as the immediate crisis threats and market pressures have receded. Recent progress on the establishment of a (limited) banking union and ongoing discussions on the introduction of contractual arrangements show that the reform engine is still running. But EU governments are lagging behind and backtracking from earlier, more ambitious plans aiming towards a (deep and) genuine economic and monetary union.

A vast majority of governments want the EU to steer clear of overambitious attempts to deepen integration, which could backfire given the negative attitudes towards the EU and the euro. According to this logic, there is a need to be realistic and accept that member states are not willing or able to go further and pool sovereignty in key areas such as taxation, the budget or social and labour policy. Those who favour consolidation point out that significant advances in economic governance  many of them unthinkable five or ten years ago  have been or are about to be achieved. The innovations introduced show results and should be given more time to work; and the revival of public support will, ultimately, depend on the ability of the Union and its member states to deliver, especially in terms of growth and jobs.

Advocates of this line of thinking want to avoid opening Pandoras Box. They hold that it is not the right time to introduce (more) major EU reforms involving also significant changes to the current Treaties elaborated by a new Convention. This would require the assent of all 28 EU countries and involve major trade-offs between capitals, risky ratification processes, constitutional amendments, and referenda in some member states.

There are, undoubtedly, good reasons to support this way of thinking. But is this path sufficient when there is a risk of history repeating itself? When the euro was conceptualised and introduced, experts and decision-makers knew that its construction was by no means perfect. But political realities at the time did not allow governments to introduce additional key elements to complete the EMUs construction. The severe consequences of this inability are being painfully felt since 2010.

Experience shows that European cooperation progresses when the immediate pressures are strong. But even if the current situation looks better than in 2012, do we really want to risk asking ourselves five, ten or fifteen years down the road why we stopped halfway when we should have been aware of the major dangers?

It goes without saying, that the EU and its member states face numerous internal and external challenges. But there is one risk which seems more profound and precarious than others. That is the danger of fragmentation   in its different shapes: (i) fragmentation between the EU and its citizens due to increased uncertainty about the added value of European integration and a growing feeling among citizens that they are directly affected by decisions taken in Brussels, which they cannot effectively influence; (ii) economic fragmentation between member states  resulting from an increasing divergence between Europes economies; (iii) fragmentation between states and societies due to a resurgence of national stereotypes and historical resentments and a harmful blame game caused by differing and often simplistic interpretations of the root causes, nature and complexity of the crisis; and (iv) social fragmentation within individual EU countries due to an increasing divide between the haves and the have-less leading to widespread perceptions of social injustice, resulting in indignation, despair and anger.

All these different forms of fragmentation have one thing in common: they provide fertile ground for populist anti-EU/euro forces to present simple answers to complex challenges. And although these anti-forces are not able to present persuasive and viable alternatives, there is a good chance that they will do well in the upcoming EP elections with negative effects at European and national levels.

It will be the key task of the EUs next leadership to identify and implement  together with national capitals  ways how to counter the manifold sources of economic, social and political fragmentation. Taking into account the prevailing sense of complacency, national navel-gazing and risk-aversion in many member states, this will be no easy undertaking.

This is why the Unions current leadership  none of whom will stay in office after the end of the current political cycle  should in their final months help prepare the political ground for their successors. The Presidents of the European Commission and the European Council should on the basis of a sober diagnosis of the current state of affairs outline the guiding principles, cornerstones and key elements of a comprehensive and ambitious, yet at the same time realistic plan, aiming to counter the major sources of fragmentation. Some of the reform proposals will necessitate substantial changes to the current Treaties requiring the assent of all 28 member states. The need to seek compromises to obtain consensus and win political and public support throughout the Union means that it will be necessary to draft a grand bargain reflecting the key interests of all member states. At the end of the day, this will also mean that some EU policies will have to be revised and maybe even partially decentralised in return for an agreement on deepening collaboration in other areas, especially economic, financial and fiscal cooperation.

The drafting of a fair new grand bargain, which needs to aim at the highest possible common denominator, will require a high degree of political craftsmanship and some political courage  but it will be worth it.

The entire issue of the BEPA Monthly Brief can be downloaded from the European Commission's websitehere.