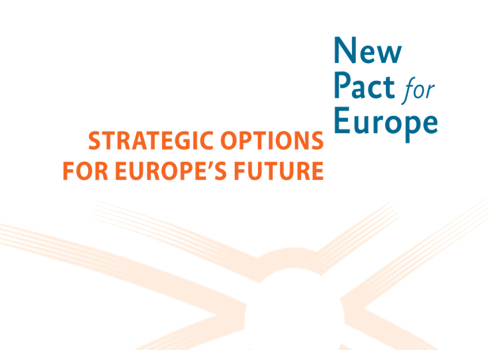 First report of the New Pact for Europe project. This report, which reflects the work and discussions of a Reflection Group including EU experts from different Member States, analyses the 'state of the Union', describes the key challenges Europe faces and presents the following five potential strategic options for the future of European integration:

Option 1  Going back to the basics: Supporters of the option argue that the events of recent years have shown that European integration has gone too far and that the EU should abandon moves towards an "ever closer union". For them performing a U-turn and undoing mistakes of the past is the most promising way forward to rescue the most worthwhile result of European integration: the Single Market. Dismantling the euro in its current form would  according to advocated of this option  not lead to a collapse of the Union, but rather herald the start of a more pragmatic, effective approach to European integration.

Option 2  Consolidating past achievements: Proponents of this option argue that the EU has already introduced most of the reforms needed to overcome the euro crisis and these should be given time to work. There is a need to be realistic and accept that Member States are not willing to go further and pool sovereignty in key areas. The EU should, at this difficult moment, steer clear of overambitious attempts to deepen integration, which could backfire given the negative political and public attitudes in many countries towards the EU and euro.

Option 3  Moving ahead ambitiously: Those supporting this option  argue that simply consolidating past achievements will not be enough: further integration, including measures to further deepen integration in the Economic and Monetary Union and boost the Union's democratic legitimacy in the public's eyes, and an honest public debate about the EU's future are vital not only to overcome the crisis but also to prepare for future challenges. All this will require significant changes to the EU Treaties. But reforms will have to be done jointly and cautiously, step by step, to avoid creating new dividing lines between EU countries.

Option 4  Leaping forward: Advocates of this option say that recent experience has provided ample proof that the EU is insufficiently equipped to face current and future challenges, and that there is a need to take a major qualitative leap towards a fully-fledged economic, fiscal, financial, social and political union, with a strong European executive ('European government') and legislature (parliament) able to take autonomous decisions reflecting genuine European interests. Potential opposition from some countries should not prevent the 'willing and able' from making a major leap forward, even if this leads to a 'core Europe' including only those countries ready to deepen integration significantly.

Option 5  Changing the 'more/less Europe' logic: Supporters of this option believe that the traditional debate about European integration along the lines of more or less Europe has been exhausted. The experience of the last six decades has shown that a further transfer of national political and democratic concepts to the European level would not work. They say that the EU and its members should concentrate on efforts aiming to make the Union more accountable to the public for its actions, find new ways to involve the public in policy-making, and boost the EU's capacity to safeguard the fundamental rights of its citizens and guarantee their basic social rights by strengthening the Union's caring dimension.

The report deliberately does not opt for one option and comes to no conclusions and makes no concrete policy proposals, because it is designed to serve as a basis to promote an open and frank debate all over Europe about possible alternative paths for the future development of the European Union. It will be discussed between December 2013-April 2014 by citizens, politicians, policy-makers and key stakeholders in about 50 events in many EU countries to generate ideas for future action. After that, the Reflection Group will draw on the outcome of these debates to draft a proposal for a New Pact for Europe, including concrete recommendations, with additional input from an Advisory Group to further enrich their work.

For more information about the project see here: www.newpactforeurope.eu