A budget for the Eurozone? 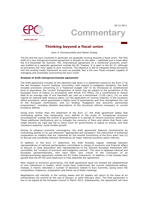 The discussions on a separate budget for the euro zone are gaining momentum. Following on from the June 2012 Van Rompuy report aiming Towards a genuine Economic and Monetary Union  which mentioned a medium-term need to define the appropriate role and functions of a central budget in the context of a fully-fledged fiscal union  the upcoming EU summit will signal a further exploration of a eurozone mechanism for fiscal solidarity. The draft conclusions mention an appropriate fiscal capacity not covered by the Unions Multiannual Financial Framework (MFF), which should be further explored.

What for and how?
Even the UK government is supportive, but for London a separate eurozone budget seems to be a mechanism by which the EU can be split into two groups of core members and more reluctant free-traders, implying a simultaneous and substantial reduction to both the size of the MFF and in what the EU 27 does. This attempt by the UK government to instrumentalise the need for further integration in the euro zone in an attempt to dismantle parts of the Union is highly unlikely to succeed, which will in turn increase the trend of the UK drifting apart from its European partners.

But even for the euro zone, there is little clarity about the key parameters of such a budget: What purpose would it fulfil and who would profit from it? How big would it be and how would it be financed? When and how would it be put in place? Could it be set up in the current treaty framework or would it require treaty change  or might it even be created outside the Unions framework? Would it be limited to euro countries or would it also be open to those pre-ins ready to contribute to such a budget? And finally, who would democratically scrutinise a separate euro zone budget  the European Parliament, or a separate formation of the EP and/or national parliaments? If the current momentum results in concrete steps towards such a budget, then much more clarity is essential.

A brake on further integration?

The bulk of a separate budget would have to be financed by the strongest euro countries, either directly through national contributions or indirectly through the new Financial Transaction Tax, for example. This raises the question of what is in it for Berlin (and other lender countries) aside from showing solidarity with the crisis countries? One possible explanation is that it is a concession intended to safeguard the opposition of the current German coalition government to the collateralisation of debt, in essence showing that help is available but wide-scale Eurobonds or any other form of substantial debt mutualisation are not on the table.

This would run counter to the intention expressed in the original Van Rompuy report, where a eurozone budget was seen as one potential component of a fiscal union but not as a replacement for other key elements. In this context, it is important to bear in mind that a separate eurozone budget would not have the same effect as debt mutualisation, as it would not per se reduce high re-financing costs of member states under pressure. However, Berlin might argue that such a budget should be aimed at countries where the spreads are excessively high, thereby removing the need for debt collateralisation.

Carrot and stick for structural reform

In terms of its functions, a separate budget could be used to incentivise and support structural and public finance reforms, especially in the crisis countries. The interim report prepared for the upcoming European Council states that a new fiscal capacity could facilitate structural reforms that improve competitiveness and potential growth through limited, temporary, flexible and targeted financial incentives. The eurozone budget could thus be used as a carrot and/or a stick: either as ex ante financial support to help countries in crisis to carry out reforms (which often require initial outlays) or to be withdrawn ex post if member states do not meet their obligations, which could potentially be made conditional on fulfilling a country-specific reform contract elaborated in the framework of the European Semester. The latter is potentially tricky, as it not only relies on the willingness but also on the ability to meet these objectives, and it raises the question of who would be the final judge  the European Commission or a new kind of European Treasury?

More generally, other countries facing significant economic challenges, such as low growth rates or low GDP per capita, might question why only the crisis countries should benefit. To address this, the budget could be distributed according to objective economic criteria, such as youth unemployment, rather than focusing on crisis indicators such as spreads. But this raises further questions  how would this differ from MFF tools such as the European Social Fund, and would non-eurozone countries, especially the pre-ins, have equal access to this eurozone budget?

In more concrete terms, one also needs to ask what the underlying purpose of a separate eurozone budget would be. Would it function as a macro-economic stabilisation tool (which many have stipulated as essential for a currency union of divergent members), a federal-style equalisation/transfer mechanism, or as a way to deliver targeted but limited funds to alleviate the social impact of the crisis, for example in relation to youth unemployment or to help to finance basic public services under strain. Both macro-economic stabilisation and a general transfer mechanism seem rather unlikely given that the size of such mechanisms would have to be much bigger than the 20-30 billion per annum mentioned in the current debate; and also taking into account the more fundamental opposition towards a Transfer Union  the interim report specifically mentions that fiscal risk sharing should not lead to permanent transfers across countries.

Support for the countries and citizens hit particularly hard by the crisis as a mechanism to alleviate the social impact of the crisis would, of course, also be in the self-interest of the better-off member states. Part of the intention must be to show that Europe cares, thus helping to create constituencies for further reforms and support for the austerity and reform programmes. But this could also backfire  to achieve such an effect, the size and the way of spending it must be designed so that the money has a real impact on the ground. If it looks like tokenism, there will be a political backlash.
Conflict and integration

Politically, opening a full discussion on a eurozone budget might endanger the envisaged speedy conclusion of an MFF deal in November. In any case, given that this budget would aim to alleviate eurozone difficulties, it seems clear that such a budget would not be part of the MFF. But it will never-the-less affect countries outside the euro zone. The pre-ins, who are committed and legally obliged to join the euro zone eventually, are already concerned about the implications of a separate budget, in terms of their political participation and the potential impact on the MFF (would there be less cohesion funding?), but also in terms of even more help being available to current eurozone members, thus potentially undermining a level-playing field in the EU 27. If such a eurozone budget aims to be inclusive, mechanisms must be found to include the pre-ins in the process if they wish to participate.
Four basic principles

Much remains unclear about a separate eurozone budget, which makes it difficult to envisage its final form and impact. Political fights loom large. Making it a genuine instrument of solidarity seems most sensible to deal with the economic and social impact of the crisis  but this will require overcoming political resistance in the countries which would have to shoulder the biggest financial burden. But the debate over a eurozone budget might also follow a much broader trend, observed again and again in the crisis: what seemed impossible becomes likely, what was inconceivable is implemented. So, we might well end up with a eurozone budget. We should thus invest time and effort to think carefully about what it should aim to achieve and how it should operate in practice.

While it is too early to decide on the details, it should follow some basic principles: it should not act as a brake on further integration; it should be substantial and effectively demonstrate solidarity with the crisis countries and their citizens without excessive conditionalities; it should be focused with a clear purpose; and it needs to be inclusive in order not to cement a separation of the euro zone from the rest. Only then can a separate eurozone budget provide a positive step forward in the resolution of the crisis.
Fabian Zuleeg is Chief Economist and Janis A. Emmanouilidis Head of Programme and Senior Policy Analyst at the European Policy Centre (EPC) in Brussels.