Stronger after the crisis - Strategic choices for Europe's way ahead 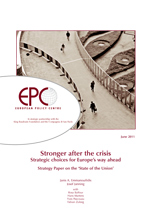 This EPC strategy paper argues that Europe finds itself at a crossroads. Either European leaders succeed in re-energising European integration or the EU will lose relevance for its citizens and become marginal as the principal instrument of shaping their future. To master the current crisis Europe needs new momentum. Translating into practice the Unions strategic objective of a global Europe, which is able to co-determine international developments in a highly dynamic global environment and deliver peace and prosperity for its citizens, requires that the EU and its members concentrate their efforts on concrete, ambitious, yet realistic, strategic projects.

The paper argues that the resolution of the euro crisis is a condicio sine qua non for the future of the European project. However, it will not suffice to merely follow a reactive approach aimed at papering over the cracks. Once the sovereign debt crisis is contained, the EU will be in dire need of proactive projects that could reignite integration, rebuild consensus, and attract and tie the leadership ambitions of its key actors on both the national and European level. For Europe to remain relevant, leaders could chose among four potential strategic projects: (1) the completion of a truly integrated internal market; (2) the establishment of a common migration and asylum policy; (3) the revitalisation of the European social model through a common vision of a Social Europe; or (4) the establishment of a Defence Union.

The strategy paper was launched at the EPC's Annual Conference. For more about this event see here.

The paper can be downloaded here.