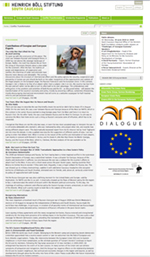 in Implications of the Georgian-Russian War in 2008  Strategic Reshaping of the European Sphere?

The paper co-authored by Janis A. Emmanouilidis and Paweł Świeboda argues that before 1989 the world was much simpler. Belonging to the Western camp and projecting decent democratic credentials guaranteed that a country would sooner or later be welcomed into the fold of European and Euro-Atlantic organisations. Today, the relationship between the European Union (EU) and its Eastern neighbours is much more complicated, as the ultimate question of 'Europe's borders' continues to haunt the EU and its members. Following the 'big bang' accession of 12 new members in 2004/2007, EU enlargement has become the victim of its own success. In many corners of the Union one can witness symptoms of exhaustion and indigestion. And this fatigue has negative effects on the relationship between the EU and its Eastern neighbours. But political and economic changes in the region and beyond, as well as developments brought about by the entry into force of the Lisbon Treaty could affect the future relationship between the EU and its Eastern partners.

Time to move up a gear
Janis A. Emmanouilidis, Post-summit Analysis, Brussels 07/2018