A New Deal to help save the euro

Link to article in European Voice 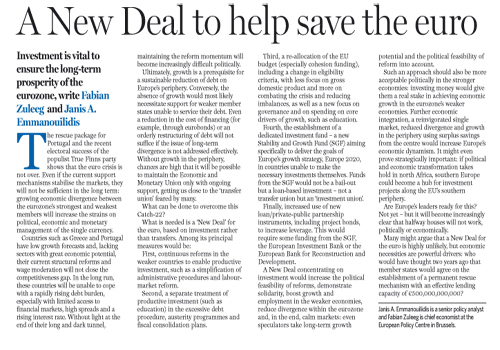 The rescue package for Portugal and the recent electoral success of the populist True Finns party shows that the euro crisis is not over. Even if the current support mechanisms stabilise the markets, they will not be sufficient in the long term: growing economic divergence between the eurozone's strongest and weakest members will increase the strains on political, economic and monetary management of the single currency.

Countries such as Greece and Portugal have low growth forecasts and, lacking sectors with great economic potential, their current structural reforms and wage moderation will not close the competitiveness gap. In the long run, these countries will be unable to cope with a rapidly rising debt burden, especially with limited access to financial markets, high spreads and a rising interest rate. Without light at the end of their long and dark tunnel, maintaining the reform momentum will become increasingly difficult politically.

Ultimately, growth is a prerequisite for a sustainable reduction of debt on Europe's periphery. Conversely, the absence of growth would most likely necessitate support for weaker member states unable to service their debt. Even a reduction in the cost of financing (for example, through eurobonds) or an orderly restructuring of debt will not suffice if the issue of long-term divergence is not addressed effectively. Without growth in the periphery, chances are high that it will be possible to maintain the Economic and Monetary Union only with ongoing support, getting us close to the ‘transfer union' feared by many.

What can be done to overcome this Catch-22?

What is needed is a ‘New Deal' for the euro, based on investment rather than transfers. Among its principal measures would be:

First, continuous reforms in the weaker countries to enable productive investment, such as a simplification of administrative procedures and labour-market reform.

Second, a separate treatment of productive investment (such as education) in the excessive debt procedure, austerity programmes and fiscal consolidation plans.

Third, a re-allocation of the EU budget (especially cohesion funding), including a change in eligibility criteria, with less focus on gross domestic product and more on combating the crisis and reducing imbalances, as well as a new focus on governance and on spending on core drivers of growth, such as education.

Fourth, the establishment of a dedicated investment fund – a new Stability and Growth Fund (SGF) aiming specifically to deliver the goals of Europe's growth strategy, Europe 2020, in countries unable to make the necessary investments themselves. Funds from the SGF would not be a bail-out but a loan-based investment – not a transfer union but an ‘investment union'.

Finally, increased use of new loan/private-public partnership instruments, including project bonds, to increase leverage. This would require some funding from the SGF, the European Investment Bank or the European Bank for Reconstruction and Development.

Such an approach should also be more acceptable politically in the stronger economies: investing money would give them a real stake in achieving economic growth in the eurozone's weaker economies. Further economic integration, a reinvigorated single market, reduced divergence and growth in the periphery using surplus savings from the centre would increase Europe's economic dynamism. It might even prove strategically important: if political and economic transformation takes hold in north Africa, southern Europe could become a hub for investment projects along the EU's southern periphery.

Are Europe's leaders ready for this? Not yet – but it will become increasingly clear that halfway houses will not work, politically or economically.

Many might argue that a New Deal for the euro is highly unlikely, but economic necessities are powerful drivers: who would have thought two years ago that member states would agree on the establishment of a permanent rescue mechanism with an effective lending capacity of €500,000,000,000?

For the entire article see here.